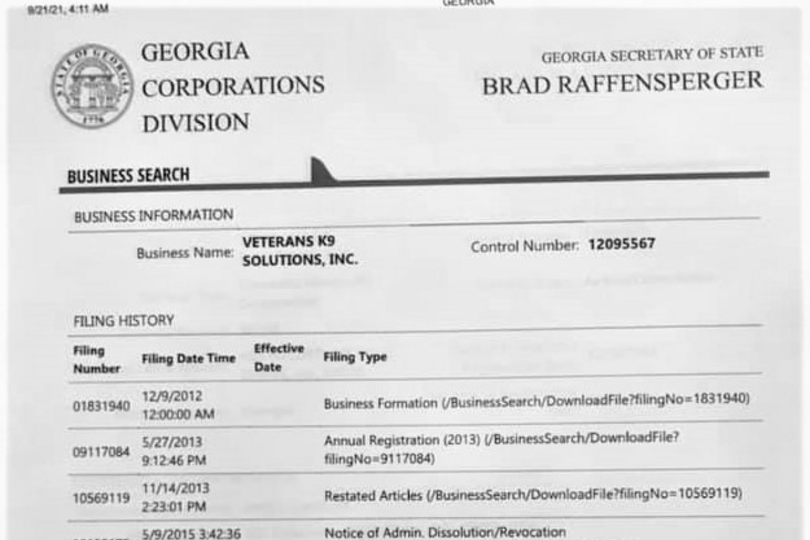 Jerry is the co-founder of Veterans K9 Solutions, Inc.  Jerry started training dogs at an early age. He trained his first dog at the age of 12. Jerry had always been brought up on the dog’s ability to use their nose and intrigued with their ability and desire to want to please. This ability of the dogs is what got Jerry’s motor running and after returning home from serving in the US Navy during Vietnam, he again started working with dogs.  Jerry has many titles from AKC obedience and at the AKC National GSD Specialty show in Perry Ga, Jerry with the help of his partners and members also ran the CSRA Working Dog Club as the training director and president.  As well as running a sport dog club Jerry was also a board of director and Judge for the original American Protection and Patrol Dog Association. He also is a board member for the Augusta German Shepherd Dog Club through the American Kennel Club. Jerry is an American Kennel Club evaluator for the Canine Good Citizen program.  Jerry now has Rogue, which is Jerry’s certified service dog pass with a 97.5%. Rogue is the poster boy of service dogs. Jerry’s father-in-law was deployed to Vietnam on two different deployments. He came back with PTSD. Because of this and his ability to train dogs and with his love for our veterans is what makes Veterans K9 Solutions, Inc.  Jerry says that it does not matter what the dog has as a job, it all stems from obedience. Training through positive motivation makes it all fun for the dog and handler. This in turn makes for a better bond and trust.

​​     Jay is the co-owner of Southern K9 Solutions and co-founder and vice president of Veterans K9 Solutions Inc.  He has an important ability in training; knowing how to read a dog.  With having this skill Jay can train any dog. Jay is an experienced obedience instructor and a certified trial and training decoy.  He has decoyed in trials, seminars, and has been the training decoy for numerous dogs who have competed and passed in ASR and APPDA , as well as decoying and training patrol and protection dogs.  Jay owns and has trained his German Shepherd Dog named Ichilles and has titled him in APPDA and to date has the highest score in PPD1.  Along with Ichilles, Jay owns two Dutch Shepherds named Meisha and Chief that are trained in personal protection.  Jay was the head decoy and vice president for the CSRA Working Dog Club as well as holding the title of one of the board of directors for the original American Protection and Patrol Dog Association.  Jay Bird as we call him understands the importance of dedication and clear communication.  With these two elements, he has brought together many service dog teams.  Getting inside the dog's head and relaying this info to the handler is not something everyone has the talent for, this is what makes Jay such an asset to Veterans K9 Solutions. What Jay has learned through experience can not be taught in any school.

Larry joined the US Army in 1985 and served proudly as a Morse Intercept Operator (Military Intelligence). His final military position was as a Security Officer (S2) until he retired in August 2009. During his 24-year military career, Larry and his family spent approximately 12 years in overseas assignments and 12 years assigned throughout the United States.  His last assignment brought him here to Fort Gordon, GA where he made the decision to retire in August 2009 and begin a new civilian career as an Intelligence Analyst with the Department of the Army.

"Like many military individuals, I separated from service with medical challenges. One evening my wife, Carla, learned about VK9S while on the internet.  Any prior thought of a Service Dog was financially out of reach but it appeared that VK9S might make the life-changing assistance available to me! Shortly after discovering the training program, I applied and was accepted. My Service Dog, Melvin, and I completed the VK9S Service Dog training program in 2019. With Melvin at my side now, completing the VK9S program has allowed me to confidently do things in my life that seemed impossible before!VK9S is a completely free program for any Veteran whose life can be enhanced by a fully trained Service Dog. Although there is no requirement to do so, I decided to volunteer with the program as my way of giving back to an organization that changed my life. VK9S is a volunteer-powered organization that I truly believe makes the lives of Veterans and their families better. For that reason, I chose to volunteer in order to keep the program going and to give back what was freely given to me. I encourage everyone who can to volunteer a little of their time in whatever way they can." - Larry

Melinye joined the Army in 1978 as a Patient Care Specialist 91C and Field Medic 91B.
Her ETS was 1983 where she then entered IRR and later transferred into the Army Reserve then onto Army National Guard.
Being married to a military man as well had Melinye traveling for years.
She currently makes military service dog vests for Veterans K9 Solutions for those who wish to have a jacket from the branch they served with to be worn by their battle buddy (Service Dog). This service is a voluntary service and one she does out of love.  To quote Melinye directly, she says,

"I do {this service} for love as Veterans K9 Solutions set me up to train my own Service Dog and as I live too far to help other Veterans train their Service Dog. I can at least do this as my give back to my fellow Veterans." - Sgt.Melinye Moore Kerce Herald Bosek

Christine is the website designer and admin help for Veterans k9 Solutions, and its civilian sister company, Southern k9 Solutions. She is the proud navy spouse of CTN3 Chris Schultz and proud German Shephard mom of Nova Star Schultz.  After being stationed at Fort Gordon in 2018, Christine met Jerry through local Navy connections and put her trust in him to train Nova.   While getting to know Jerry during Nova's training, she found out more about the vk9s mission to save the lives of both dogs and vets.  She happily came aboard and is a part of the volunteer crew!

"Meeting Jerry in 2019 was the best thing to come out of moving to Fort Gordon for me.   The group at Vk9S is the most kindhearted, talented group of people I've ever met.  If it weren't for Jerry and Vk9 Solutions, I would be a lonely navy spouse with a very wild German Shephard.   Jerry took both Nova and me under his wing, and I can never repay his kindness!   I have met such amazing people in Veterans k9 Solutions and I feel very blessed to help in whatever way I can.  Navy, PTSD, and dogs are three major pillars in my life.   This mission is close to my heart because of it. I am very happy to be here!     - I'll be moving to my new duty station soon, but I will forever be a part of VK9s for as long as they'll let me! ;) " - Christine